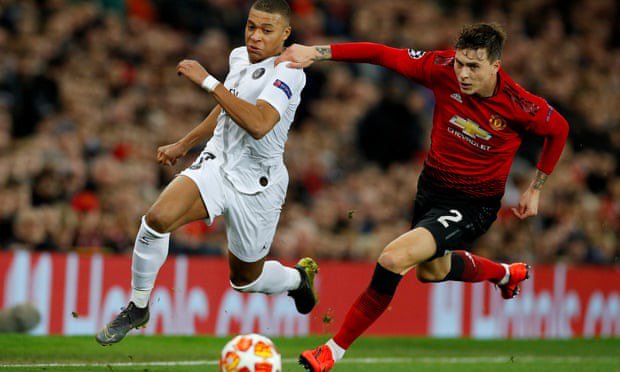 Champions League exit is staring them in the face, reminding them that they should look more towards becoming continental champions again rather than just being contented with a Top Four finish in the Premier League. END_OF_DOCUMENT_TOKEN_TO_BE_REPLACED

It is crystal clear that the former Chelsea, Blackburn and Wigan striker, Franco di Santo is performing far better in Germany than when he was in England.

The unheralded striker was one of the dangerous enemies to the goalkeepers in German Bundesliga especially when he recently joined Werder Bremen where he scored 12 goals in his last 18 matches.

Surprisingly, in the forward’s views on the two leagues, and contrary to the popular claim, he confessed that players in Germany are made to train harder than their Premier League counterparts.

He also noted that the matches are more ‘intense’ and competitive in the Bundesliga.

“When I got to German Bundesliga, I was thinking things would be a little bit less intense than the Premier League we all know,” Di Santo said. END_OF_DOCUMENT_TOKEN_TO_BE_REPLACED

IS ROMA ENOUGH FOR SZCZESNY TO RETURN HOME?

A�PetrCech was a rock as far as Chelseaa��s history gets to be documented for the coming generation.

Not even a head injury could stop him from going on to be known as the king of one on one situations plus other little tricks he used for years to destabilize onrushing strikers and their likes and in the end got away with the ball safely tucked in the safety of his limbs or at worse parried away from his guard station a�� the goal line.

It still didna��t stop Chelsea from separating business from emotional attachments as The Blues came to the conclusion that not only was he spent, his waiting-in-line back up Belgium international Thibaut Courtois will be an upgrade.

Then Arsenal snapped him up. The Gunners for some reason have struggled to find someone with similar capable gloves of David Seaman.

In WoljciechSzczesny and Lucas Fabianski, Wenger hoped his prayers would be answered only to be disappointed by the inconsistency of the aforementioned lot.

Of all the criticisms the Arsenal manager have had to endure from pundits and fans, his dogmatic attachment to the belief of only operating with a youthful side was the most rife. Signing Peter Cech served as a pointer that maybe his flexibility in thinking was finally around the corner. END_OF_DOCUMENT_TOKEN_TO_BE_REPLACED

Arsenal are once again gunning for a late rush ride to the 4th spot on the EPL log.

It is something The Londonershave become accustomed to in recent years away from the era where they dominated the Premier League with Alex Fergusona��s United, an era where domestic success was looked upon as the least achievement required of the team each season.

Nowadays with Arab money burrowing its way through the established hierarchy of footballing top dogs in virtually every major league in Europe and time and circumstances doing the rest, the professora��s once envied kid has somehow become forced to share the lime light with the new boys and of recent are being bullied into the background due to their inability to compete financially.

Since then The Gunnera��s routine has become more of early season title-pretences, mid-season collapses and laterush to a Champions League spot.

Same can be said of this season except that a new variable has appeared: Tottenham. The cross town rivals have frankly being part and parcel of the new lows Wenger and his team have faced this season starting from finishing above them for the first time in 22 years to serving as a positional block to the gunnersa�� climb into the top four END_OF_DOCUMENT_TOKEN_TO_BE_REPLACED

Chelsea manager Antonio Conte has told his players to remain concentrate on the league and not be carried away by the win against Arsenal.

He said that the league is still long and that a lot of things can happen from now until the end of the season. He does not want his players to believe that they have already won the title as he wants them to remain focused.

Antonio Conte said that he was delighted with the manner his side beat Arsenal and this is proof that his team has improved considerably. Indeed Chelsea was well beaten by Arsenal earlier in the season, and it was that defeat that prompted Conte to make changes to his formation.

Conte said that his players were great against Arsenal and that they prevented the Gunners from creating any chances. However, he wants them to remain focus on the title race as he believes that teams such as Tottenham Hotspurs and Manchester City can still catch them. END_OF_DOCUMENT_TOKEN_TO_BE_REPLACED

The Euro 2016 star picked up the award for the fourth time after votes were compiled. Zidane took out time to drop some comments ahead of the cluba��s clash with a Mexican side in the Club World Cup in Japan.

a�?Cristiano is hugely motivated for this game a�� as always. He would be motivated even if it were a friendly, thata��s just the sort of player he is. Obviously we have many great players at Real Madrid but ita��s very rare one player wins so many awards,a�? Zidane said.

a�?To win four Ballon da��Ors is a fabulous achievement and ita��s not an easy thing to do. What hea��s doing is absolutely incredible. Maybe he deserves a fifth one too!a�? Zidane added, pushing Ronaldo to equal Lionel Messia��s record. END_OF_DOCUMENT_TOKEN_TO_BE_REPLACED